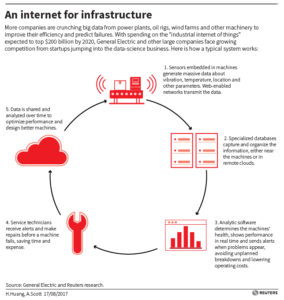 Not all bold ideas are winners. Fail fast is a goal of many savvy start-up companies as they move into a new marketplace or test out new technologies. There are literally scores of apps that are born and die every day in relative silence.

But none of these issues were fatal. Predix has already gained some big clients including Exelon Corp and Schindler Holding AG. Orders were also up 24% in the first half of 2017. GE insiders are confident that Predix can still become a winner because no other competitor has the same unique applications. They are also not able to offer those applications globally.

This month, General Electric Co. (GE) is taking a turn in the failed product spotlight, or at least the failed for now spotlight. The product in question is Predix, the software platform GE developed to connect to and collect and analyze data from industrial machines. Predix supports the industrial Internet of Things (IoT) through scaling asset performance management (APM) and provides a way to connect machines, data and people. Predix was part of GEs six year, $4-billion transformation into a digital industrial company under the leadership of CEO Jeffrey Immelt. This last spring, a two month time-out was called so developers could tackle Predix problems.  Now, new CEO John Flannery wants to cut costs and lift profits in 2018.

That doesnt mean, however, that Predix is dead. It does mean that GE has redefined digital revenue and dropped expectations of digital revenue from $15 to $12 billion in 2020. It also appears that Flannery remains committed to Immelts vision of the company as a digital industrial company. They still believe the industrial Internet market will be worth $225 billion by 2020.

Fast Food Lunch or a Mortgage: Which Takes Less Time?

Predix is not as fully developed as GE represents it to be, has minimal market penetration and has not been battle-tested at scale.

Legacy coding languages used to define Predixs algorithms took longer to straighten out than planned. Also, GE had to keep tweaking and twisting the  platform a bit each time they acquired new applications like ServiceMax and Meridium.

On the other hand, multinational conglomerate failures tend be very messy or very public affairs. Not always Edsel or New Coke messy, but at least Betamax or Google Glass public.

When it was introduced, GE said they expected Predix software to do for factories and plants what Apples iOS did for cell phones. Predix would allow industrial grade sensors to be used to get information about how efficiently a particular machine, or an entire factory floor is running. As this infographic they produced with Reuters shows, that in turn allows for efficiencies in every aspect of production.

Create Your Own VR World with Google Blocks

Ina reportpublished in June, 2017 Isaac Brown, Lux Research Analyst said, Predix is not as fully developed as GE represents it to be, has minimal market penetration and has not been battle-tested at scale.

So what went wrong with Predix? Was it bad marketing? Did customers not see or understand the value proposition? Was there a lack of understanding of how difficult a job it would be to integrate many different codes into one platform? The answer seems to be yes to all. There were certainly struggles in each of these areas.

Its when the going gets a little rough, as it has for GE and Predix, that bold action is needed to stay the course. For GE that means keeping its focus on building out the platform and its customer base, a job that will be challenging to do right at scale.