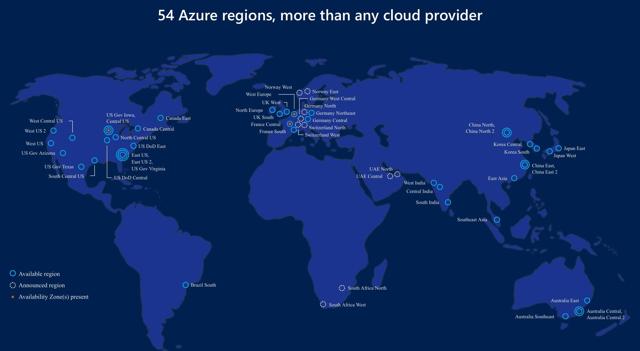 Disclosure:I/we have no positions in any stocks mentioned, and no plans to initiate any positions within the next 72 hours.

General Electric and Microsoft announced an expanded agreement that has the potential to benefit both firms immensely.

Earlier this year, I wrote anarticleabout GE Digital, the digital operations within General Electric. In that article, I highlighted the growth the business generated, with sales rising from $3.1 billion in 2015 to $4 billion last year and with more growth on the horizon apparent based on incoming orders. For anybody not familiar with GE Digital, I recommend you read that piece before proceeding further.

General Electric, as a firm already focused on IIoT, has some of the greatest chances to benefit from this transition.

To report a factual error in this article,

Because of how new and how fast-growing the IoT (Internet of Things) space is, nobody really knows how big the opportunity is. The only common agreement between firms trying to forecast the future is that growth potential is significant. Take, for instance, a look at a forecast conducted by GrowthEnabler and MarketsandMarkets that was provided in anarticlethrough Forbes last year. By their estimate, revenue in the space totaled $157 billion in 2016, and by 2020 its expected to grow to $457 billion. Other forecasts, also provided in the same Forbes article, show materially different figures, but the general consensus is that the space is large and growing.

One source, GSMA Intelligence, provided by General Electric in its press release, believes that by 2025 the global IoT space will account for revenue of $1.1 trillion. A major part of this growth (an estimated 68% of total revenue), its believed, will come from platforms, applications, and services, and will be fueled by a surge in IoT connections. In 2016, its believed that there were 6.3 billion IoT connections across the globe. This should grow to 25.2 billion by 2025, with 13.8 billion being attributable to IIoT (Industrial IoT). The remaining 11.4 billion connections will be attributable to the consumer market.

I wrote this article myself, and it expresses my own opinions. I am not receiving compensation for it (other than from Seeking Alpha). I have no business relationship with any company whose stock is mentioned in this article.

General Electric is far from perfect and the companys issues are not immaterial. That said, this move by management to work alongside Microsoft in an expanded agreement to benefit from one anothers strengths is a huge win for shareholders. Assuming nothing else rocks the boat along the way, its highly probable that GE Digital will create for shareholders and industrial customers alike significant value. Microsofts investors also stand to benefit from this arrangement for natural reasons, but given how hard General Electric has been hit over the past couple of years, a win for them is likely more meaningful for it and its shareholders than it is for Microsofts.

For all its faults and shortcomings, one thing the management team atGeneral Electric(NYSE:GE) has done well on is the transition the world is making from analog to digital. The latest proof of this came on July 16th when managementannouncedan expanded partnership with software giantMicrosoft(NASDAQ:MSFT) thats geared toward capitalizing on the shift of industrial firms from a largely non-digital existence to a digital one. To investors in General Electric who are unhappy with the firms performance, this may seem like another empty promise, but theres no denying that the upside potential from this could be a game-changer for the conglomerate.

This agreement, in my opinion, further bolsters General Electrics move toward digital because the fact of the matter is that Azure is a significant offering that the company can use to improve its appeal. While specific revenue figures have not been offered by Microsoft yet, Azures growth in recent years has been jaw-dropping. Last year,revenue for the platformgrew an astounding 99% over 2016, and in thelatest quarterrevenue growth was 93% compared to the same quarter of Microsofts latest fiscal year.

This leaves significant potential for General Electric since the firms services arent just fast-growing but are focused on the industrial space anyways. As companies seek to optimize their assets by enabling information tracking and performing real-time analysis on operations, GE Digitals offerings will only grow. While management has not provided any indication of what growth will mean for the conglomerates bottom line, we know from Microsoft that digital operations like cloud offerings come with attractive margins. In the first three quarters of the technology giants current fiscal year, the operating margin for its Intelligent Cloud business totaled 33.7%. Similar margins arent unrealistic for GE Digital, especially as revenue continues to grow. The general conclusion I had from that piece was that, based on what data we have available, shareholders could realize significant value creation in the long run. Now, with General Electrics expanded relationship with Microsoft, that picture could look even better. You see, according to the agreement, the two businesses will work together in an effort to provide operational technology and information technology to help companies in their transition to a more digital world.

Strong growth and high margins associated with the transition to a digital global economy will create significant opportunities for both businesses.

Another benefit to this agreement relates to how well-connected both General Electric and Microsoft are globally. In its latest three quarters of this year, 48.8% of Microsofts $80.28 billion in sales (or $39.18 billion total) came from countries outside of the US. With operations in 140 nations and with its Azure footprint in 42 regions (with 12 more in the works), this allows for significant scalability for customer adoption. General Electric is even more global than Microsoft is. Whilegeographic datafor GE Digital has not been offered up, 62.1% of its $122.1 billion in sales last year (or $75.8 billion total) came from outside the US. Thats up from just 55% of sales in 2015. The fact that both firms will be working with one another to co-sell and participate in the go-to-market function means that revenue growth associated with their relationship can translate to material market share capture in the next several years.

As part of this process, General Electric will seek to standardize GE Digital Predix offerings on Microsoft Azure, a cloud computing service created by Microsoft that serves as a scalable platform geared toward assisting its customers with computing, networking, storage, database management, analytics, and more. A special focus, it seems, will be on integrating the system with Azures native cloud capabilities, which includes Azure IoT and Azure Data and Analytics.

Over the next few years, itsexpectedthat this trend will continue. According to Citi Research, its believed that Azure will be responsible for $19 billion worth of Microsofts sales in 2020. This is still smaller than the $44 billion in revenue the company believes will be generated by the AWS offering provided byAmazon(NASDAQ:AMZN) in 2020, but its greater than the $17 billion thats anticipated forAlphabet(NASDAQ:GOOG) (NASDAQ:GOOGL). Part of the appeal behind Azure, according to Microsoft, is that their service can act as a hybrid cloud. It can deploy to existing data centers and it can provide customers with the scale they need (though AWS can certainly do the same).