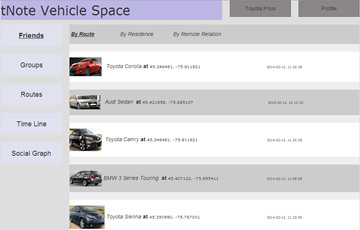 Internet of Things is promoting all the possible smart devices to be connected to a global network where each device will be able to render services from other connected devices. This communication is analogous to the social communication of human being which is now represented by online social networks. Social Internet of Things (SIoT) is addressing this new paradigm of machine-to-machine social networks. As a key member of Smart Cities, vehicles are seeing growing interests from research community in the aspect of Internet of Vehicles. In our research, we proposed a Social Internet of Vehicles (SIoV) system which is an instance of the SIoT specifically targeting the vehicular domain.

SIoV system uses the popular system components described in the Vehicular Ad-hoc Networks (VANETs) and realign them according to the proposals made in the IoT-Architecture Reference Model to better place IoV with other IoT domains for easier integration and higher portability.  We also identified the social interactions and structures of vehicle-to-vehicle socialization and added additional system components to better manage the generated data. SIoV interaction generates distributed data at various levels of vehicle-to-vehicle, vehicle-to-infrastructure, vehicle-to-home communications and transfer all the data from infrastructure-to-cloud. Different groups of users ranging from driver to transport authority can use different levels of these data from real time to data mining applications.

1. MUDVA: A Multi-Sensory Dataset for the Vehicular CPS Applications: download the paper and access the full data set under

Developing a Human Affective States and their Influences Ontology

Machine to Machine Social Networks for the Internet of Vehicles