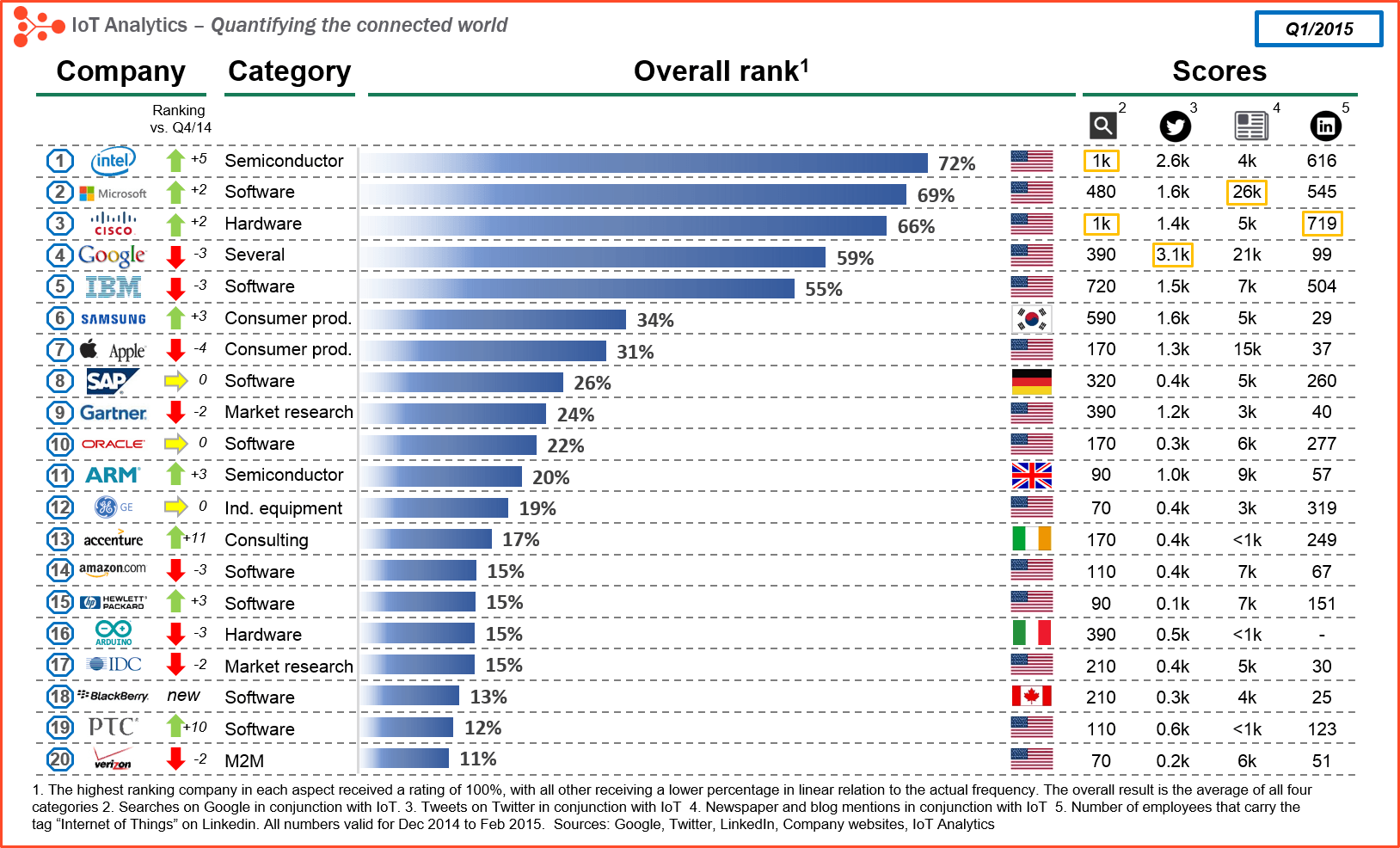 German giant SAP dominates the enterprise software market. But the company is betting that with the Internet of Things that market is going to change drastically. SAP is positioning their HANA database as the secret sauce to make Internet of Things run simple. Besides enabling their ERP-System with IoT functionality and experimenting with M2M platforms, SAP is undertaking pilot projects in logistics, service, and manufacturing operations among others.

I think the dynamics of the IoT industry is going to very different. Present day startups will take up a big chunk of the market space.

Gartners reputation in the internet of things stems mainly from their famous hype-cycle. In 2011, when almost nobody used the term Internet of Things, Gartner placed IoT into its steeply rising part of the hype-cycle. In 2014 Gartner announced that IoT had finally reached the peak of inflated expectations. What follows is the trough of disillusionment. Most Internet of Things companies are hoping that for once Gartner has it wrong and IoT will not fall as deeply as concepts such as virtual reality or gesture control have.

We measure which Internet of Things companies people search for on Google and talk about on Twitter, which firms make the newspaper and blog headlines, and how many IoT-focused employees these companies have.

Samsungs acquisition of one of the leading smart home platforms, SmartThings, lifted Samsung into the top 10 Internet of Things companies. Apart from that, Samsung is obviously a large player in the wearables space.

Microsoft shares the same fate as Intel. The company missed out on the opportunity for operating systems in smartphones with Windows phones currently enjoying a mere 3% market share.

GE is among the leading Industrial Internet of Things companies. It actually coined the term Industrial Internet (of Things). GE is rolling-out solutions in a number of industries such as aviation, manufacturing, or power generation. The company claims to have achieved $1bn of revenues with industrial internet products in 2014.

The once so popular manufacturer of first generation smartphones offers an IoT platform, specifically for automotive and asset tracking.

This is one awesome forum post. Keep writing. Candra

The last one of the big five Internet of Things companies is IBM. IBM invests heavily in enterprise application infrastructure and databases for connected devices. Also analytics. IBM, much like Intel or Microsoft, partners with other companies to create IoT showcases in different areas.

The highest scoring company in each aspect receives a rating of 100%, with all other Internet of Things companies receiving a lower percentage in linear relation to the actual frequency.

It seems as though the technology giant is giving the Internet of Things less of a marketing-push than other Silicon-Valley tech heavy-weights. Oracles IoT activity is centered on their cloud platform.

The basis for the ranking is our own database of 1700+ Internet of Things companies. We rank these firms in four categories:

IoT Analytics continues to track these and more Internet of Things companies. Periodically we will redo this analysis and monitor which new companies will rise up through the IoT ranks.

15 Internet of Things stocks you should own today Therefore Intel is at the forefront of developing new generation low-power chips for connected IoT devices. Intel R&D centers (so called Intel Open Labs) and a number of industry co-operations (e.g., Intel and Kukas PC-based robot-controllers) lay the foundation of Intels IoT push. Moreover Intel is targeting startups and developers. The Intel Galileo developer kit for anyone who wants to create their own thing is being marketed heavily throughout the world. The latest addition to Intel IoT portfolio is a platform for connecting the data from your things to the cloud.

Verizon is one of the leading companies for machine-to-machine (M2M) managed services in North America that allow for data communication via the cellular network. Verizon is specifically showcasing communication solutions in the connected health and connected car space.

This is wrong way to rank the companies. This is purely popularity ranking. A company with better marketing spend is rated higher doesnt mean their investments in R&D and products are high or they are doing better in the market.

Subscribe to our newsletter or follow us on your favorite social media channel to stay on top with our analyses. Or even better, send us your feedback or ideas!

Great analysis. I really like this. I have myself done a course on IoT and what it means for semiconductors recently that is highly complementary to these analyses. Check out you can get the course for almost free with the coupon IoTIntroPrice.

Apple does IoT the Apple way. Developing behind closed curtains and then coming out with a bang. Right now Apples Internet of Things activity is centered on the Apple Watch and the Apple HomeKit platform. There is also an Apple HealthKit. But you bet Apple is already on the next big thing. Although not yet announced, it appears Apple is entering the Internet-connected car market for example.

The top company in sensor technology is ??please provide information. Sensors will play an important place in IOT.

PTC is the mother company of the popular Thingworx IoT platform.

A number of recent publications have catapulted Accenture into the top 20 of this ranking. Over the course of just 3 months the number of Accenture employees associated with IoT has gone from 11 to ~250 on Linkedin.

I really liked your post.Really thajk you!

Intels CEO Brian Krzanich has learned from the past: When smartphones entered the market, Intel didnt think the opportunity was worth capturing. By the time Intel realized how large the smartphone semiconductor market would be, others had grabbed the opportunity. With the Internet of Things promising some ~50 billion connected devices in the next 5 years, Brian Krzanich wants Intel Inside.

Together with Gartner, IDC is establishing itself as one of the leading Internet of Things companies focused on market research.

Microsoft has 3 IoT propositions: Firstly, the Azure platform promises to become the one-stop-shop cloud platform for connected devices. Secondly, Microsoft Streaming Analytics aims to benefit from a new kind of processing that will be necessary to extract meaning from sensor data in real-time. Thirdly, Microsoft has entered the wearables and health space with the Microsoft Band. Apart from these product lines, Microsoft is experimenting in the industrial IoT space. In a joint project with robot manufacturer Kuka, Microsoft recently equipped a Jeep Wrangler plant with Microsoft technology to run manufacturing lines. Similar projects have been piloted in the connected health and connected car space.

Arduinos development boards continue to excite the maker scene. They serve as a basis for many startup prototypes.

Cisco coined the term Internet of Everything. The company is centering its business strategy on the Internet of Things like no other tech heavy-weight. 720 Cisco employees that identify with IoT on Linkedin is a number that speaks for itself. Ciscos move to embrace IoT is a natural one though because it is at the heart of what Cisco has always done: Developing network equipment like routers and switches for enterprise customers. Apart from network equipment, Cisco is also active in security solutions and Cisco is the host of the IoT World Forum.

Very crisp and good consolidation for comparison. Thanks for the information posted. Getting insights into number of cloud platforms available for IoT , IBM seems to be more advanced. Is there any other platform which closely can be related to IBM.

According to our latest web-analytics ranking there is a head-to-head race going on between 5 companies: Intel, Microsoft, Cisco, Google, and IBM.

United Kingdom based ARM is that dominant smartphone semiconductor company that Intel never became. ARMs answer to IoT is the low-power Cortex processor family as well as the mbed cloud platform.