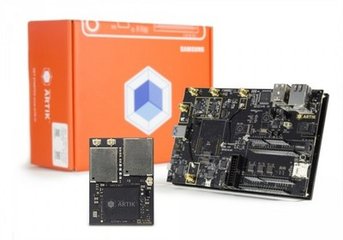 Andrew Foster is product director atIOTechand has more than 20 years of experience developing IoT and other Distributed Real-time and Embedded (DRE) software products and services. He has held senior management positions in product delivery, product management and product marketing. Prior to joining IOTech, he was the product marketing manager atPrismTechand lead a team responsible for helping to grow PrismTechs global market presence. He can be reached .

We also have commercial issues. Corporations want the safety of large IoT company endorsement versus the obvious benefits of small company innovation and entrepreneurship. And with such a high growth market, how can any modern technology become pervasive quickly enough to make an impact?

The loosely coupled architecture allows for independent microservices to be distributed across discrete hardware devices, written in different code bases (e.g. Java, JavaScript, Python, C/C++, Golang), and communicate with sensors, each other, and with other computing infrastructures via HTTP-REST/MQTT, and other protocols.

These factors are driving major players within industry to promote a complementary approach called edge computing or fog computing for the Industrial IoT.

These technical and business issues underscore a challenge with delivering value with the Industrial IoT. Can the barriers to IoT innovation, adoption and deployment be lowered ,or are we just creating a new and huge systems integration problem? Provide a flexible microservices architecture that can support the use of any combination of heterogeneous ingredients plugged into a common interoperability foundation.

Case Study: Blockchain Takes a Spin Around the Real-Estate Block

According to theOpenFog Consortium,whose work focuses on influencing standards development and promoting innovation and industry interest in fog computing, the growth in IoT is explosive, impressive and unsustainable under current architectural approaches.

The possibility of intermittent cloud connectivity is a serious concern for mission-critical IoT applications such as a connected vehicle or other types of autonomous systems.

Enable support for any combination of device interfaces to normalize connectivity protocols (both existing standards and proprietary) into a common API.

In an edge computing model, sensors and connected devices transmit data to a nearby edge computing device, such as a gateway device that processes or analyzes the data locally, instead of sending it back to the cloud or a remote data center.

The Core Services and Deployment Framework has been architected to be as agnostic as possible when it comes to both hardware (e.g. x86, ARM) and operating systems (e.g. various flavors of Linux and Windows), while also recognizing that drivers for physical hardware I/O and certain functionality such as deep security and system management are reliant on the host platform and OS. For these functions, the EdgeX Foundry Platform can simply be tailored to the hardware and OS of choice. The EdgeX Foundry platform is available under an Apache 2.0 open source license.

Allow functionality to be distributed across multiple edge hardware nodes or across processors within a given node.

Its Now a Global Race to Digitize Manufacturing

The EdgeX Foundry  is collaborating with numerous other standards bodies and consortia including OpenFog and the IIC.  The EdgeX Foundry architecture was designed to be well-aligned with the OpenFog reference architecture with the intent of the EdgeX code acting as a baseline ingredient for OpenFog test beds that prove out scalable fog computing deployments. The intended collaboration with the IIC is to take this a step further by  focusing on test beds for specific industrial markets and use cases.

For companies to benefit from the data generated by billions of new smart sensors and devices, they must be able to analyze the right data, at the right location in the network, and at the right time. Doing so helps a company gain the insights to increase productivity, improve operational efficiency, and generate new business value.

Why the Industrial IoT Needs an Open-Source Edge Platform

Support drop-in replacements of microservices or entire subsections with more performant versions without requiring architectural changes (e.g., enabling a developer to replace a Java-based microservice with one written in C while not having to replace the entire solution).

The Industrial IoT could be left with dozens of platforms and a huge device and systems integration headache. IOTechs Keith Steele and Andrew Foster write that an open-source platform with industry partnerships may overcome that challenge.

Data governance and security many organizations have sensitive data that they dont want to leave their premises under any circumstances.

Why the Industrial IoT Needs an Open-Source Edge Platform

With Automated Decision Making, What Happens to BI Professionals?

Edge computing offers a promising way to address some of the limitations of cloud-centric design;  however the problem is compounded by the fact the Industrial IoT is not a homogeneous thing, but rather a fragmented collection of technologies based on embedded systems and machine-to-machine communications across different vertical applications.

Keith Steele is CEO ofIOTech. He has a 25-year track record of starting and growing successful software companies. He began his career with Texas Instruments and has since held CEO roles with a multinational systems integration business, an international contract R&D company and an oil industry focused software products company.

They add: Many IoT deployments face challenges related to latency, network bandwidth, reliability and security, which cannot be addressed in cloud-only models.  Fog computing adds a hierarchy of elements between the cloud and endpoint devices, and between devices and gateways, to meet these challenges in a high performance, open and interoperable way.

Our best content on big data, real-time analytics, and the IoT

The project is aligned around a common goal: the simplification and standardization of the foundation for edge computing architectures in the IIoT market, while still allowing the ecosystem to add significant value. Whats more this isnt slideware there is an implementation. The core of the new project is over 125,000 lines of code donated by Dell as part of a CTO-funded project called FUSE, developed with feedback from its partners, customers, and even competitors.

EdgeX Foundry has already gained a broad partner ecosystem of IIoT supporting companies (both large and small) that is continuing the development of the architecture, code base, and community ecosystem.  A vibrant open-source community of vendors and users focused around a common set of objectives is key to addressing IIoT market fragmentation in a significant way.

The current landscape is adds to the complexity for users trying to build end-to-end systems, as IIoT designs often require the integration of multiple systems and technologies, making it necessary for a diverse set of system integrators (SIs) and partners to work together. The current fragmented landscape has resulted in a patchwork of custom solutions that hinder time to ROI and is inhibiting the overall growth of the IoT industry. Learn more:Why the Industrial IoT needs semantic standards

For applications that require real-time decision making for the IIoT thats currently measured in milliseconds to seconds the latencies involved in shipping the data to the cloud for analytics are unacceptable.

In Business 4.0, IoT is the Great Enabler

Mastering the Art of Container Orchestration

Key tenets for the EdgeX Foundry Project include the following:

TheOpenFog ConsortiumIndustrial Internet Consortiumand others are focused on platform standards definition and evolution, use cases, testbeds, architectures and demos. Sounds good, but where are the implementations? And how do we avoid ending up with another 300 platforms for the edge and a huge systems integration problem, which would slow down IoT adoption and market scale?

The EdgeX Foundry business model also provides an opportunity for new IIoT players to enter the market with innovative products and services leveraging the collective community effort and building on the open-source core.

Current Industrial IoT systems rely on a myriad of proprietary and open-source software platforms, using a vast range of communication technologies to connect endpoints and applications in both greenfield and brownfield (legacy) deployments. IIoT designers are forced to become familiar with a plethora of tool sets, application development environments, operating systems, connectivity types including both standard and proprietary protocols cybersecurity defence and industry-specific standards.

Allow services to scale up and down based on device capability and use case.

Increasing costs of shipping the large volumes of data to the cloud for processing and storage.

Partnership is an overused word, but in this diverse market, its fundamental. We need a partnership not only to deliver the right technology but also a business execution model that can offer the potential to accelerate market adoption and scale. An open-source approach seems the most likely to succeed, and one new project in particular seems to have all the right ingredients. The Linux FoundationsEdgeX Foundry Projectis a major new initiative launched in April 2017 at Hannover Messe with 50 launch partners. Its goal is to tackle head-on the problem described above.

The EdgeX Foundry technology vision is to be a flexible, platform-independent, highly scalable, and industrial-grade open-source edge software platform one supported by a rich partner ecosystem adding value with components that can quickly and easily deliver interoperability between things, applications and services, across a wide range of use cases.

Case Study: Knowing Where Your Security Force Is, in Real-Time

Right now, most of this data management and analysis is performed in the cloud or in  enterprise data centers.  It is becoming clear that the current generation of cloud-centric architectures have limitations that are forcing the industry to re-think the design on the next generation of industrial IoT (IIoT) systems. These limitations include the following:

Its hardly surprising, therefore, that we are hearing from industry insiders about the slow pace of IIoT adoption, with many projects stalling at proof-of-concept stage. We have market fragmentation, multiple standards, and a diverse set of technologies that need to be brought together into an end-to-end platform to support this new breed of applications.