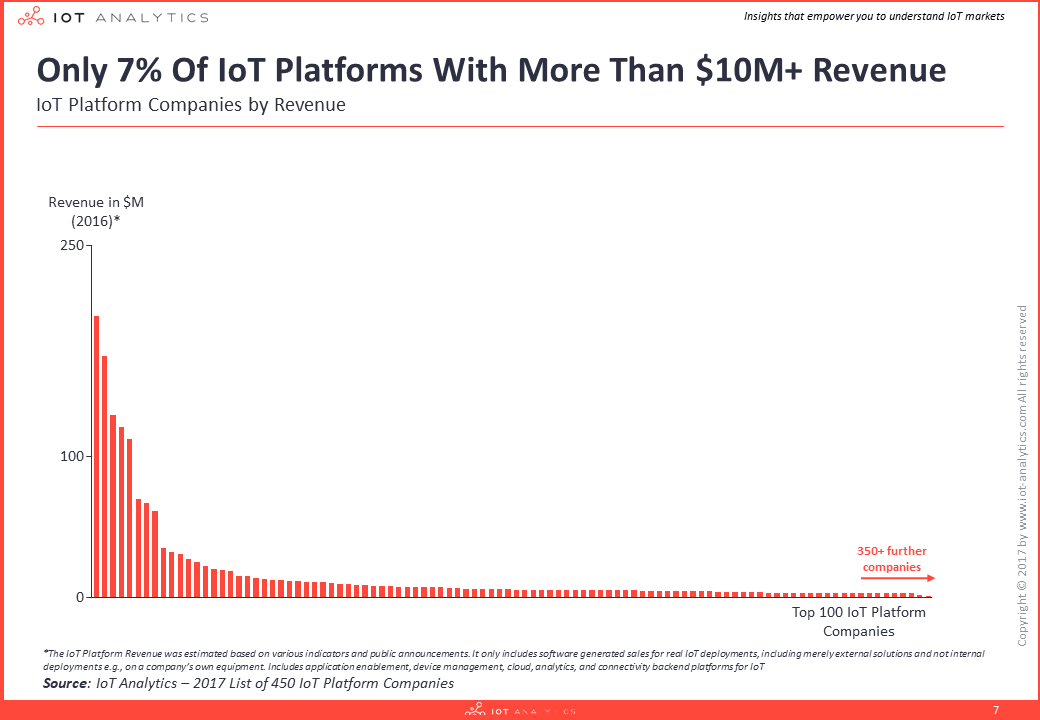 Uptake, an analytics platform which was founded in 2014, achieved the impressive funding round of $90M in Series B.

We do not provide IoT platform but IoT security framework to be integratd into those ioT platforms.

By keeping the devices Connectivity, Integration, Management, Configuration, Authentication & Authorization as a major IOT concern hIOTron is also offering an IOT platform [HIDMP] through which [Hi-Gate (A Enterprise & Custom IOT gateway)] can be used along with customizable mobile Application/Dashboard frameworks for enabling any End-To-End IOT solution in just 3 simple steps. Configure Customize Simulate

I dont see AT&T IoT platform in your reporting and website. Actually the platform deserves the place in top 25.

Im just wondering if WISeKey is mentioned in your report.

According to our analysis, the number of new IoT Platform startups reached its peak in 2013, with numbers going down ever since. Startups coming to market in 2016 have a different focus than those that started in 2013 or earlier: Back then many of the startups had a horizontal, cross-industry approach to IoT while nowadays there seems to be a higher numbers of niche IoT Platforms that are specialized by vertical, technology or use case. Examples are: Axonize, an IoT platform for System Integrators or Tachyus, an IoT Platform for the Oil & Gas Industry.

Disclaimer: This article does not provide guidance or intend to compare technical features of different IoT platforms. It looks at the market and compares platforms purely on a market meta level.

Half of all IoT Platform companies made less than $1M in 2016We believe, only 7% of the 450 IoT Platform companies generated revenues in excess of $10M with their IoT Platforms in 2016. Furthermore, more than half of all companies made less than $1M, most of them smaller startups. The firms leading the pack are mainly made up of large cloud players, legacy device management and connectivity backend platforms as well as a handful of heavily backed Silicon Valley startups that are scaling faster than most of their counterparts around the world. Successful startup examples include predictive analytics firm Uptake and the open Smart Home Platform SmartThings, acquired by Samsung in 2014 and now acting as their subsidiary.

Although some firms claim billion-dollar revenue streams through IoT, our IoT Platform Comparison continues to show that these claims are mostly pure marketing. In the last year, we followed-up at least two such claims with larger vendors and found that they claimed new IoT revenue that had actually been relabelled from previously existing revenue. Furthermore, the sales figures included expensive hardware equipment and only very little software revenue.

*Note: Many startups only become visible after a few years

Actility, a LPWA solution provider that runs the Thingpark platform which caters mostly to Lora deployments, received funding of $50M in April 2017. Cisco investments is one of the named investors.

The top 5 new jobs created by the Industrial IoT

Note: The IoT Platform Revenue was estimated based on various indicators and public announcements. It only includes software generated sales for real IoT deployments, including merely external solutions and not internal deployments e.g., on a companys own equipment.

for WISeKey check out our List of IoT Security Companies here:

The consensus growth estimate for IoT markets, as provided by various analyst firms, lies between 25% and 40% annual growth for the next 5 years. Many of the IoT Platform Companies, however currently report numbers well above the forecast. A few smaller startups have stated that they are currently doubling revenue each year but even leading providers recently reported growth rates above 50%. Three examples:

C3 IoT, valued at $1.4BN in March 2017, recently announced arevenue increa搜索引擎优化f 65% year-over-year and bookings that have grown by 600%. The company also claims to have 100M Sensors and devices under management so far, the highest number publicly announced. Most of the acquisitions are performed by tech firms that play in the vicinity of IoT but lack IoT platform capabilities. The acquisition of Cumulocity by Software AGearlier in 2017is a good example for an analytics and enterprise software focused company completing their offering by acquiring a  pure-play IoT Platform vendor.

Funding for IoT Platform startups has risen sharply between 2011 and 2016.

Cisco Jaspers connectivity management platform Control Center has grown from 3,500 user companies in March 2016to more than 9,000in February 2017, thereby increasing the number of managed connected devices from 17M to 40M.

PTC increased its IoT revenue by 52%in 2016. Its core IoT offering is the application enablement Platform Thingworx, which it acquired in 2014.

In the recent update to ourIoT Platform Company List for 2017, we compared more than 450 companies that have an IoT Platform in their offering. After including 260 IoT Platforms in our 2015 analysis and 360 in 2016 analysis, the 450 companies assessed in our latest research set anew record. Building on our 2016 article 5 Things to know about the IoT Platform Ecosystem, this IoT Platform comparison looked at 5 types of different IoT platforms:

One note of caution: In our mind, these growth numbers are a reflection of the large amount of pilot projects and POCs happening in the market but do not (yet) indicate the long-awaited IoT breakthrough that would lift this market into the billions.

The IoT Platform Comparison reveals that the other large segments are Smart Cities (22%), Smart Home (21%) and Energy (21%). Customer Health is the least popular segment for IoT Platforms, with only 5% of all IoT Platforms offering solutions. These results concur with our analysis of thetop IoT application areas, in which the 4 leading segments were Connected Industry, Smart City, Smart Energy and Connected Car.

Im curious about future of the IoT platform market structure. You can find the IoT Platform Company List 2017hereand request a free samplehere.

Feel free to get in touch with the team at IoT Analytics in case of any inquiries and follow us on social media: I prefer the latter case and I hope the open standard of the IoT platform for the each industry would be established where many kinds of players could provide product and survice.

There are generally more IoT Platform Companies focussing on Business/Enterprise IoT than Consumer IoT. The most popular segment for IoT Platforms lies in manufacturing and industrial solutions. 32% of the IoT Platform Companies offer solutions for this market including industrial automation firms like Siemens, ABB, Schneider or Bosch but also software vendors like IBM, PTC or Microsoft. Typical supported use cases include production performance management, manufacturing analytics, predictive maintenance and remote service.

Will the industrial internet disrupt the smart factory of the future? How do I help IoT Analytics to understand full value prop to get the information on the comparison chart?

Meanwhile the number of acquisitions in the IoT Platform market is on the rise. 2016 was the first year in which the number of newly acquired companies (17) rose higher than the number of startups we identified (13)*. The deal value of the 6 acquisitions that disclosed the purchasing price lies around $11B.

Half of the IoT Platform funding issued in 2017 so far went to two companies (Actility and Uptake). Neither of them are pure-play IoT Platform firms.

A few player would take the dominant position with integrated system like the Microsoft in office application, or players would be layered into the product supplier and the system integrator like Dell/HP and Accenture?

Zaña Diaz Williams is a senior research analyst focusing specifically on the future of industrial technology: Industrie 4.0, industrial internet, IIoT. Her background is in production technology and management.