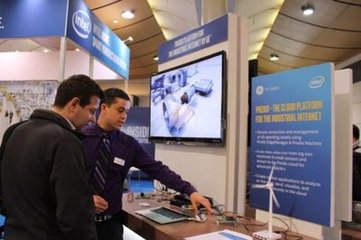 The deal will allow Predix essentially an IoT platform for industrial machines to be interconnected to use Microsofts cloud applications and capabilities. Those capabilities include artificial intelligence, natural language programming and some advanced predictive analytics, which will be used to optimize those industrial machines everything from train wheels to package shipping machines, asWSJauthor Austen Hufford puts it.

This site uses Akismet to reduce spam.Learn how your comment data is processed.

It seems everyone nowadays is doing the cloud thing or the Internet of Things thing. Conglomerate General Electric, which offers everything from power to business transformation is also on the bandwagon, and theyve now announced that Predix, their Internet of Things (IoT) platform, will move to Microsofts Cloud Infrastructure-as-a-Service platform Azure.

You have entered an incorrect email address!

The cloud industry is one of the fastest growing segments within technology. Estimates currently put global cloud revenues at well over $100 million, and growing at somewhere between 20 and 30% every year. In itself, thats of significance, but of greater significance from this storys viewpoint is Microsofts need to compete with players like IBM and Amazons Amazon Web Services (AWS), which are the current leaders in cloud infrastructure.

And thats why this deal is critical for Microsoft. By engaging with a major player like GE, they can create synergies in several other areas that will involve their key growth drivers for the future Office 365 and Windows 10.

The move is significant because is is more of a partnership than a client-vendor relationship. Microsoft needs more big ticket names on Azure as much as GE needs a solid cloud platform on which to rest its IoT offering.

AWS has been the leader in this segment for a long time since its inception in 2006, as a matter of fact. However, second place hasnt always been that clear. The two biggest contenders so far have been IBM and Microsoft, with Google, Oracle and a few other players on the fringes.

Microsoft has reported a consistent doubling of Azure revenues quarter over quarter, but a recentreportfrom the IDC shows that IBMs SoftLayer is actually the second largest service after AWS in terms of revenues.

Itll be interesting to see how this relationship pans out over the next few months. Stay tuned.